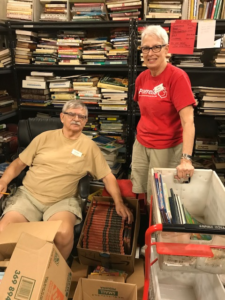 For the past 12 years, Barb and John Stahura have been devoting a lot of their time to Poverello, and it appears there’s no end in sight for these two dedicated volunteers. They’ve devoted so much of their time, in fact, that they were nominated by Poverello in 2014 for the “Volunteer of the Year” award, which is presented annually by the Volunteer Broward organization. They clocked an amazing 2,000 plus hours of service to Poverello in that year alone.

Married for 43 years, Barb and John met in Columbus, Ohio, where they were both pursuing PhD degrees in Sociology at Ohio State University. That’s right…the two of them have PhD degrees in Sociology. Barb, a native of Cleveland, Ohio, retired early from her research position at Purdue University in West Lafayette, Indiana, where she and John, and their son, Matt, had a home. Looking to get out of the cold Indiana winters, they purchased a condominium home in Pompano Beach. Barb came down first and got a job at two dive shops (Barb is still an avid scuba diver), while John, a native of Whiting, Indiana (who prefers fishing), slowed down from a full-time to part-time position as a professor of sociology at Purdue. After a short time, Barb left the dive shops, but was looking to volunteer her time with a charitable organization. One of her neighbors was volunteering at Poverello, and suggested that Barb check it out. “From the moment I walked in the door at the Wilton Drive store and looked around,” Barb related, “I knew that this was the place for me. The level of activity was amazing,” she continued, “and I could see that they definitely could use some help.”

When John finally retired, they sold their home in Indiana and became permanent residents of Pompano Beach. This was just about the time Poverello was about to open its new facility at Equality Park on Dixie Highway. Before the current Thrift Store opened its doors, John and Barb got to work re-organizing the book and media department, creating a small “book store” within the thrift shop. To this day, John’s primary task is sorting through the thousands of books, CDs, DVDs and other media that are donated to Poverello each year, while Barb maintains the book and media department on the floor. This includes sorting and organizing magazines, CDs, vinyl, VHS tapes and DVDs. “We have an amazing selection of book titles in just about every category and genre, and a sizeable selection of media as well,” John pointed out.

While John is soft-spoken and very much “the professor,” Barb has a vibrant personality, often entertaining the Poverello staff and volunteers, and sometimes even the store’s customers, with her quick wit. She even has a following on Facebook with a feature she calls, “As Seen at the Thrift,” that features photos of some of the more unique and unusual items that come into the thrift store.

Barb and John love volunteering their time to Poverello’s cause, and they are often spending a few hours a day, seven days a week, doing so. “Something new happens around here every day,” Barb remarked. “There’s never a dull moment,” she added, emphatically.

“Whatever community organization, whether it’s a women’s organization, or fighting for racial justice…you will get satisfaction out of doing something to give back to the community that you never get in any other way.” 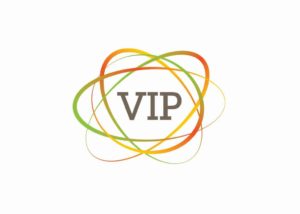